How to explain the ‘cognitive reserve’, measure it and further develop studies about this phenomenon?

Some older adults maintain good memory and cognitive skills even in the face of extensive amyloid and tau pathology in the brain. This resilience has been dubbed “cognitive reserve,” but researchers still do not know exactly what explains it or how to measure it directly. At the Alzheimer’s Association International Conference 2017, held July 16–20 in London, hints emerged that specific organizational features of the brain underlie this phenomenon. Several researchers highlighted functional brain networks that correlate with preserved cognition. One reported that more efficient neuronal networks help people resist the effects of AD pathology. Another suggested using brain volume to devise a simple num   erical measure of cognitive reserve, which scientists still cannot quantify. Such a measure could allow researchers to predict how quickly AD will progress in a given person. Though preliminary, these initial studies are beginning to paint a better picture of brain resilience.

Reserve has been loosely defined as the variation in functional brain characteristics that provides resilience against the cognitive decline brought on by aging, injury, or disease (Apr 2017 conference news). Researchers detect it by identifying people who maintain better cognition than expected given their age or disease stage. Because years of education and IQ score correlate with reserve, these measures are often used as proxies for it.

What brain feature might explain this resistance? One candidate is a hub of the frontoparietal control network found in the left frontal cortex (LFC). This LFC hub has been associated with IQ in young people, and tends to be spared in AD, Ewers said. It couples with various other networks to perform different tasks. To find out what role this hub played in cognitive reserve, Ewers analyzed ADNI resting-state fMRI data on 44 amyloid-positive people with MCI. He found that MCI patients whose LFC hub was more tightly connected with the rest of the brain maintained sharper episodic memory than those with low connectivity for the same degree of hypometabolism. High connectivity also associated with more education, as would be expected for a measure of cognitive reserve (Franzmeier et al., 2017).

Was this link between resting-state connectivity and memory just a correlation, or does greater LFC connectivity actually help people perform better while doing a task? Ewers investigated this question in a cohort of 37 healthy controls and 17 MCI patients who completed a face-name association task that measured episodic memory while being scanned (see image above). Higher connectivity of the LFC hub to regions such as the medial temporal and parietal lobe during the task correlated with better performance, indicating that this network played a direct role in episodic memory. High connectivity again correlated with years of education, supporting the idea that LFC hub connectivity measures cognitive reserve (Franzmeier et al., 2017).

Ewers next wondered if high LFC connectivity might delay cognitive decline. He analyzed data from the Dominantly Inherited Alzheimer Network (DIAN) and from DELCODE, a German study of sporadic AD. In both cohorts, people with higher LFC connectivity had better cognitive abilities than those with low connectivity at any given level of pathology. Those with higher connectivity declined more slowly as well. Strengthening this network might be a therapeutic strategy, Ewers suggested.

Another talk at AAIC complemented these findings. Rachel Buckley of Massachusetts General Hospital in Charlestown investigated the relationships of five functional brain networks to several proxies of cognitive reserve, including education, IQ, occupational attainment, and self-reported cognitive activities. She analyzed resting-state fMRI data from 243 cognitively healthy participants in the Harvard Aging Brain Study; 182 were amyloid-negative, while 61 were amyloid-positive.

She found that connectivity in the right frontoparietal control network was most associated with cognitive reserve. While her data implicate the right rather than the left frontal cortex as Ewers found, the two studies both point to the importance of the frontoparietal network. The DMN, dorsal attention, and salience networks had a weaker relationship to proxies of cognitive reserve, and the motor network had none, as might be expected. Connectivity of these networks correlated least with occupational attainment and most strongly with IQ score, suggesting this was the best proxy for cognitive reserve. Amyloid burden did not affect the relationship between connectivity and reserve.

A Cognitive Reserve Network? Parts of the DMN and task-positive networks either activate (red), or deactivate (blue), respectively, during all cognitive tasks, and also correlate with IQ. [Courtesy of Yaakov Stern, AAIC 2017.]

Identifying a Cognitive Reserve Network for All Cognitive Domains

Another talk at AAIC identified a different brain network associated with IQ that may play an important role in cognitive reserve. Yaakov Stern of Columbia University, New York, used task-related fMRI rather than resting-state to find a network involved with preserving cognitive abilities. He noted that many previous studies of cognitive reserve examined the functional brain networks that activated when participants perform only a single cognitive task (e.g., Steffener et al., 2011). However, cognitive reserve preserves numerous cognitive abilities, such as memory, language, and executive function, not just single cognitive domains, Stern said. To identify a single brain network that correlated with reserve across a variety of mental challenges, Stern analyzed data from the Reference Ability Neural Network study. This aging study employs fMRI to identify brain networks responsible for the mental abilities that change the most with age: reasoning, episodic memory, processing speed, and vocabulary. About 300 cognitively healthy adults from age 20 to 80 completed 12 cognitive tasks that called on these skills while under the scanner (Stern et al., 2014; Habeck et al., 2016).

Stern analyzed data from 220 participants, using IQ scores as a proxy for cognitive reserve. He searched for a pattern of brain areas that activated during all 12 tasks, with the degree of activation correlating with IQ. He found a network that encompassed multiple brain areas, including parts of the default mode network (DMN) and parts of the task-positive network (see image above). The former, which includes the medial temporal lobe, medial prefrontal cortex, and posterior cingulate cortex, turns off during tasks, while the latter, which includes the superior parietal lobe, lateral prefrontal regions, and insular cortex, activates. To find out if this combination network responded during any mental challenge, Stern tested participants on a different type of activation task. Again, the same network lit up, with its degree of activation correlating with IQ score. Thus, this pattern of activation may point to a cognitive reserve (CR) network, Stern suggested.

Marina Weiler, now at the National Institutes of Health, Bethesda, Maryland, took yet a different approach to identifying what underlies cognitive reserve. She noted that neuronal networks organize themselves according to psychologist Stanley Milgram’s “small-world problem,” a.k.a. six degrees of separation (Travers and Milgram, 1969). This is the idea that any two people in the world can be connected to each other by a chain of no more than six acquaintances. In the case of neurons, they achieve this high connectivity by making many local connections and only a few long-range connections. This allows them to perform complex local processing but also send messages across the brain quickly, reaching any other neuron through few intermediaries. Previous research demonstrated that such small-world networks are highly efficient, with a high benefit and low cost to the brain, Weiler said.

Does this type of organization help brains resist pathology? Weiler, who at the time worked at the University of Campinas, São Paulo, Brazil, examined a cohort of 70 people, which consisted of 28 controls, 28 people with amnestic MCI, and 14 with mild AD. Weiler noted that the participants represented a wide range of education levels and IQs. She measured pathology using cerebrospinal fluid markers of Aβ, t-tau, and p-tau, and brain efficiency by applying a graph theory approach to resting-state fMRI data. By analyzing functional connectivity data with the GraphVar toolbox, which allows users to deduce the brain’s topographic organization based on fMRI data, Weiler obtained multiple measures of network efficiency (Kruschwitz et al., 2015).

Across all diagnostic groups, the people who had the most cognitive reserve, as determined by education and IQ score, also had the greatest small-world connectivity, Weiler found, suggesting that this could be a measure of reserve. As some other studies have reported, higher levels of education and IQ did not protect people from developing the pathophysiological features of AD. Notably, however, education level did seem to modify the effects of pathology on network efficiency in aMCI and AD patients. AD patients normally lose the small-world organization of neuronal networks, but those with more education better maintained this. The finding suggests that AD patients with more reserve are better able to cope with the effects of pathology, Weiler said. 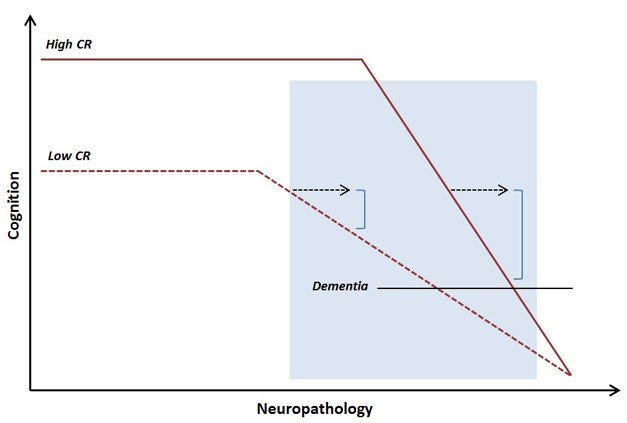 A Dynamic Measure of Reserve

One drawback to these functional connectivity measures of cognitive reserve is that they are not easily quantifiable. Anita Van Loenhoud of VU University Medical Center, Amsterdam, derived a simpler, numerical measure of cognitive reserve. She used data from amyloid-positive participants in the Amsterdam Dementia Cohort, 56 of whom had subjective cognitive decline, 108 MCI, and 347 AD. She compared their brain volumes, as determined by structural MRI, to their scores on a cognitive composite. Because the brain shrinks with aging and with AD, people with lower volume typically have poorer cognition. Van Loenhoud calculated a statistical W-score for each person based on how much their cortical volume differed from what she expected given their cognitive score. W-scores are similar to z-scores, but adjusted for specific covariates like age and sex. Those who had a low W-score, meaning less brain volume than their cognitive scores would suggest, were considered to have high cognitive reserve.

Van Loenhoud then examined how W-scores related to disease progression. Unexpectedly, she found that MCI patients with low W-scores, and thus high cognitive reserve, were more likely to progress to AD than were their peers with high W-scores (van Loenhoud et al., 2017). Though initially puzzling, the data fit with some previous observations. Although people with high reserve have a lower risk of dementia, after an AD diagnosis, they actually progress more rapidly than others do, likely because they do not show symptoms until their pathological burden is large and their disease quite advanced. These MCI patients were probably already at the point in disease where decline accelerates, Van Loenhoud suggested (see image above).

W-scores represent a dynamic measure of cognitive reserve, since they depend on current brain volume, which changes over the course of the disease, van Loenhoud noted. This may make the measure more useful for prognosis than static measures. Supporting this, education level, a static measure, did not predict disease progression in this cohort. In future work, van Loenhoud plans to incorporate other measures of pathology into the score to refine its prognostic use.—Madolyn Bowman Rogers