Learn more about some of BRAINN´s innovation initiatives.

BIPMed – Precision Medicine for everyone

The Brazilian Initiative on Precision Medicine (BIPMed) is an initiative of five Research Innovation and Dissemination Centers (RIDCs) supported by FAPESP:

Precision Medicine has emerged recently as a concept in which scientific knowledge and technology will come together to provide the bases for the 21st century medicine. It embraces translational research, genomic medicine and personalized medicine and proposes a new level of integration of data in order to improve health care.

BIPMed is based initially on a software platform, built following the guidelines and principles of the Global Alliance for Genomics and Health, and observing the responsible sharing of genomic and clinical data. This platform is the first of its kind in Latin America and aims to offer public access to genomic and phenotypic data. It is intended to be used by clinicians and scientists all over the world, to share and obtain information about various aspects of genomic medicine and human health, as well as to support dissemination and training in the areas of human molecular genetics, computational biology and others.  On November 10th, BIPMed became the Brazilian Country Node of the The Human Variome Project. We believe that BIPMed will be essential for the development of Precision Medicine in Brazil, allowing for significant advances in health care and health science research.

Under Professor Gabriela Castellano´s coordination, the BRAINN team develops two projects aimed at rehabilitating stroke patients. One of them uses Virtual Reality (VR) and the other employs Augmented Reality (AR) technologies. The tools – which are still under testing – adopt strategies that stimulate the patient´s motor coordination and make exercises more fun. Before we further explain these projects, it is important to understand the differences between VR and AR.

In Virtual Reality, the subject is immersed in a three-dimensional interface and participates in certain scenarios. His movements are reproduced inside a fictional setting. The Kinect movement sensor – the same one found in the Xbox game console – is used in the activities.

As for the Augmented Reality, the difference lies in the use of 3D elements that can be inserted ‘into the real world’. Many financial institutions employ AR, for instance, to facilitate finding agencies in a city. When the user points the cellphone camera at what´s in front of him, an app incorporates virtual elements to the real image captured by the lenses. It is the fictitious merging into reality.

For the AR project, the focus lies on patients with arm movement limitations. A camera captures an image of the patient and transmits it to a computer. Then, BRAINN´s software analyses the person´s body e ‘substitutes’ the impaired arm with a digital one, created by AR. Sensors attached to the patient transmit signals to the computer, which interprets them and activates the virtual arm´s movements.

The idea behind both experiments is to determine if the cerebral patterns change as the training sessions progress. 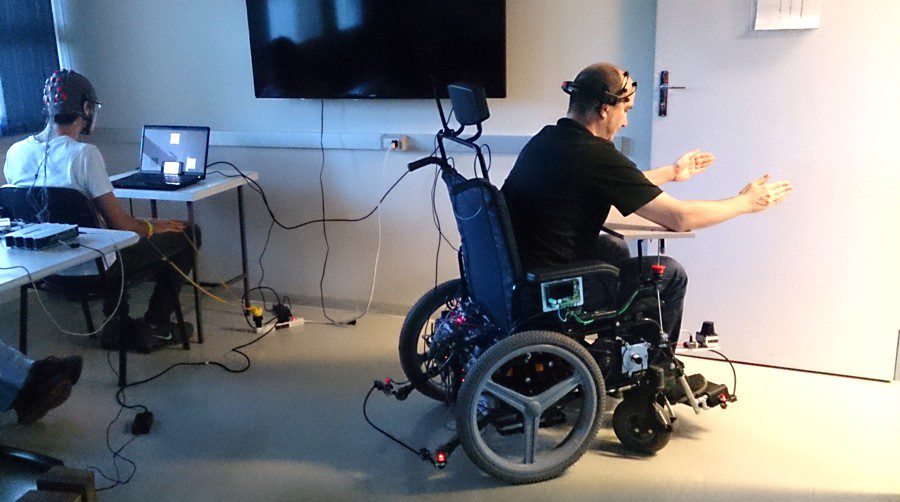 Wheelchair prototype being tested at FEEC/UNICAMP.

One of the most important assistive projects that are now underway in Brazil takes place at the School of Electrical and Computer Engineering (FEEC) at the University of Campinas (Unicamp). A team of researchers from RIDC BRAINN is working on the prototype of a robotic wheelchair that can be fully controlled by head and facial movements.

“We conduct research on several fronts, including technologies that respond to facial expressions, other from visual stimuli (eyetracking), activated by voice, and, finally, technologies based on Brain-Computer Interface (BCI), which is ability to convert brain signals into computer-recognizable commands”, explains Professor Eleri Cardozo, member of the development team and a BRAINN researcher.

There is still no prediction as to when the prototype will reach the market, but the ambitions of those involved in the project generate enormous expectations. “The laboratory tests are essential if we want to create a comfortable equipment, one that can be used all the time, in a natural way,” said Cardozo. “Our expectation is not to launch a completely new wheelchair. We want to use what’s best of all this technology in a module that can be installed in a common wheelchair, that is, something that the person already has,” he continues.

The prototype under development at FEEC is equipped with wireless and cable connections, circuit breakers, sensors, batteries and cameras. The BRAINN researcher expects that the module, when it is released, will be more affordable than other wheelchairs on the market.

The prototype, whose development involves researchers from BRAINN, was featured in the electronic journal of science communication ComCiência.