BRAINN – A Research Center Focused on Our Mind

There is an old scientific saying that ‘nothing in the universe is as complex as the human brain’ – that is, nothing besides the universe itself! With 100 billion neurons forming endless connections with each other, the brain is able to quickly process the huge amount of information that floods, every second, our sense organs. It is capable of imagining hypothetical futures, analyzing the past, dreaming, thinking about itself … how these incredible processes work, however, remains one of the biggest mysteries that mankind tries to unravel.

“Everything we do, every thought we’ve ever had, is produced by the human brain. But exactly how it operates remains one of the biggest unsolved mysteries, and it seems the more we probe its secrets, the more surprises we find”, Neil deGrasse Tyson (1958 – ), north-American astrophysicist.

The brain is equivalent to only 2% of our body weight, but consumes, alone, 20% of all the oxygen and energy available. It is a powerful factory of ideas, concepts and interpretations that operates 24 hours a day. When we are awake and the brain works at full speed, it produces enough energy to light a small lamp!

Where do we begin the study of such a complex organ? Over 120 years ago, Spanish scientist Santiago Ramón y Cajal started off a branch of science that still seeks to unravel the puzzles behind the brain power: neuroscience. With a simple microscope and a revolutionary dye for the time, Santiago managed to blush individual neurons and discover cellular patterns never before perceived, paving the way for early studies of the cells and structures that allow the brain to function properly.

At the time, it was believed that the brain and the neurons worked as an immense network, always physically connected. But the Spanish scientist noted that all the wonders created by the brain were essentially the work of many small individual cells, which communicated through “small wires”. Today, we know much more about the organ’s anatomy and biology – and we are still discovering a lot every year. But one thing has not changed since the last century: the enchantment that each new discovery about the brain brings! Just like Santiago, modern scientists continue devoting efforts to discover the smallest details about it, and they cheer over every proven novelty. 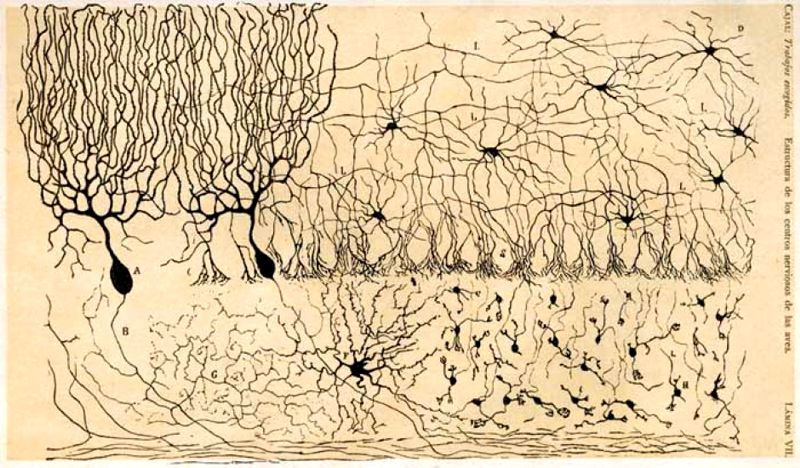 One of Santiago Cajal’s engravings – the Spanish scientist was amazed to observe the complex connections between brain cells, their most diverse sizes and shapes.

About his observations in the microscope, Santiago expressed: “What an unexpected sight! On a perfectly translucent yellow background, sparse black filaments appeared; they were flat and thin or thick and thorny, as well as triangular, stellate or fusiform bodies! One would think they were drawings in Chinese ink or Japanese transparent paper. The eye is bewildered (…) “.

One thing is true: analyzing the brain always aroused amazement and almost poetic exclamations! From Santiago’s rudimentary technique to the most sophisticated methods of today, observing how the brain is organized remains a beautiful and very inspiring task.

“The human brain has 100 billion neurons, each neuron connected to 10,000 other neurons. On our shoulders we have the most complicated machine in the whole universe”, Michio Kaku (1947 -), theoretical physicist.

Today, technologies such as MRI and PET-scan help Science advance the knowledge of how the brain works and how brain cells communicate with each other. In just a few decades, humankind has moved from the simple analysis under the microscope of Santiago to the observation of functioning human neurons in real time!

More than that: based on these new technologies, modern knowledge of the brain helps us understand, prevent and treat diseases that affect our precious “thinking machine”. These include stroke and epilepsy, focus of the studies of the research groups here at BRAINN!

Fascinated by such a complex puzzle as how the brain functions, BRAINN researchers dedicate their efforts to investigate the mechanisms that lead to epilepsy and cerebral vascular accident (stroke), as well as the damage caused by the progression of these diseases. Always looking for new ways to understand, treat and prevent these and other diseases of the brain.

Overall epilepsy rates around the world. Darker shades of purple indicate greater chances of occurrence of epilepsy in the population. Adapted from EpilepsyU.com

The importance of such studies is enormous: according to the World Health Organization, 15 million people suffer strokes each year in the world; of these, 1/3 gets serious sequelae and 1/3 dies. As for epilepsy, it impacts today 50 million people, of all ages, and still has no cure.

BRAINN unites renowned scientists from various fields of knowledge to meet the challenges of the study of the brain. In order to accomplish this task, various “fronts” are combined, including genetics, neurobiology, pharmacology, neuroimaging, computer science, robotics, engineering and physics.

The results of the studies conducted at BRAINN will not only benefit patients with epilepsy, stroke and other prevalent diseases, but also substantially contribute to the advancement of scientific discussions in the fields of neurology, psychiatry and cognitive neuroscience.

Join our team of experts in this exciting scientific journey inside our brains! Follow the BRAINN.org.br website to keep updated with the latest findings and news about “the most complex machine in the universe” and learn all about the brain through our educational materials.

After all, as was very well explained by the Nobel laureate Stanley Prusiner (1942 -), respected neurologist and biochemist, “Neuroscience is by far the most exciting branch of science, because the brain is the most fascinating object in the universe. Every human brain is different – the brain makes every human a unique being and defines who we are“- … how not to fall in love with the brain and yearn to learn everything about it? Come with us in this learning journey!